This story is part of a series spotlighting LGBTQ creatives — from art directors to glam squads — who help bring your favorite artists’ visions to life.

No matter how many screens, pyrotechnics and moving platforms a concert has, the artist should be the center of attention. But the right tour visuals set the tone of a show and allow fans to recapture the thrill of falling in love with an artist for the first time. Kate Moross, founder of London-based creative agency Studio Moross, takes Billboard inside the process — as well as the many sleepless nights and tech disasters — of art-directing tours for the likes of the Spice Girls, Sam Smith, and Disclosure.

At one point in the creation of a live show do you start designing visuals? 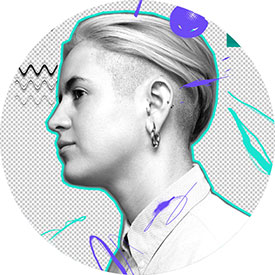 It really depends on the project. You can come on board late in the process, when [the stage and screens] have been designed and people are looking for bespoke content. Or it could be from the very start: I worked with Jason [Sherwood, the stage designer for the 2019 Spice World tour] and saw his renders before we pitched to the Spice Girls directly. For a band like Disclosure, we’d listen to the set, sit in a room and do ideation with them. It really depends on your relationship with the artist. I’ve done everything from just designing one or two songs in a live show among other people all the way to commissioning the work.

It takes a village to put on a huge tour production. Which other crew members do you work with?

When I first started doing visuals, it was just me and the band and my own projector and console. For a stadium show, you can go up to a crew of 90 people. You work with video and lighting technicians, camera technicians, the camera director. You work with a creative director who is overseeing the vision of the entire project. With the Spice Girls, we had Lee Lodge as the creative director, and his job is to direct all the creatives — the choreographer, the lighting, the videos, the costumes, the music. When you have someone like that above you, you have the opportunity to focus on your lane and make sure that you’re doing what you do best.

It’s an incredibly rich crew. You make friends with everyone, because you all share the same food and space and travel. And unfortunately, it’s a community of workers that are seeing some of the hardest times because live music has completely shut down.

What’s the side of your job that fans don’t see?

My first big job was for One Direction, and someone who had designed a lot of the show gave me really good advice: Seventy percent of the work that you do before you show up on set will go in the bin. You might design an entire show in preproduction before you arrive on set, but I guarantee that very little of it will be the same by the time you reach the show. Everything gets shelved or changed or adjusted. You see things in real life, and they just don’t look as good as you thought.

Now that LED screens have become more readily available, we have loads more pixels to fill and keep up with. A single song in the Spice Girls show, I think, was 30 gigabytes of data. You might have to rerender that song every day — just think about how much data you’re processing. And computers can be incredibly temperamental. We employed a monitor who watched the renders every night to make sure they happened successfully because one failure can ruin an entire day of rehearsing. We had one night working when it was very cold, and someone unplugged our entire cabin to plug in a heater. We lost all of our work for that night.

Things like that happen all the time. I watched a Game of Thrones documentary that said a producer’s job is to survive. Touring is a bit like that. You’re paid to make it through, and by some grace of God, it all comes together.

Fans don’t always think critically about art direction during a show — they’re focused on the artist. But when done well, what do great visuals add to an experience?

I go to a lot of shows and often feel like the artist had an idea and got someone to execute it for them, but they hadn’t really thought about how the show looks in the same way that they thought about the setlist. And sometimes you have shows that are highly conceptual, with a thread that runs through from the start to the end, and it’s sensational. There is some validity in a big pop show where every number is a bit different and it’s a mish-mash — as long as you give what feels right. It’s just understanding what the fans want.

With the Spice Girls shows, the fans had incredibly high expectations of what that show was going to be, so we had to deliver something above and beyond. We couldn’t just roll out some old numbers and stick some nostalgic designs on it. It had to be a spectacle. Our entire brief for ourselves was to maintain the integrity of the Spice brand and create something that felt as monumental to a fan now as it did when they were 12.

The Spice Girls tour opened with a video message that welcomed all gender identities and sexual orientations, and Sam Smith is one of the best-known non-binary musicians. What does it mean to you to work on these projects?

For me, it has to feel relevant. It can’t just be something that you apply. For the Spice Girls, I wasn’t just a fan when I was a kid — it genuinely felt like a part of my identity was allowed to be because of the girls’ messaging. As a queer and trans person, I’m aware that a large part of their audience also identifies within that [spectrum]. And the Spice Girls themselves wanted to ensure that message of inclusivity. When we were putting together that opening statement, it was a difficult time in the world, so we wanted to create a space where it was joyous and happy but, in that sense, also quite political.

With Sam, it’s obviously relevant to them because they talk about themselves and their identity in their show and their music. I’d worked with Sam for years, but to bring the show to life as well was a really beautiful experience.

What was it like working on Sam’s The Thrill of It All tour? The stage had a particularly unique set-up with that pyramid structure.

Sam’s show is much more theatrical, and I worked with the same team I worked with on the Spice Girls, actually. That’s where we forged our bond. Jason designed Sam’s show, and then Lee asked me to do the content on the pyramid. I was Sam’s art director in the past, creating single and album art, so I understood the tone and visuals we could bring in. For example, the visual for “Nirvana,” one of Sam’s early singles, had been this green fog, so I suggested we use that green fog in the show.

Weirdly, my role stepped up when Sam’s show went to Asia and they needed a more portable version of the show. That’s something that’s quite common with big stadium and arena tours: You have an A, B and C show — different versions that will work in different venues or at festivals. Maybe you can’t fit your set on the stage, or you can’t get the equipment into the country because it’s too heavy to fly. We really enjoyed making the three-dimensional world two-dimensional and recreating it architecturally on screen.

What’s it like to see the final product at a show?

I cried my eyes out during the first Spice Girls show just because I was so exhausted. Literally, I watched the rehearsal and burst into tears. I just walked down through the stadium corridors like, “I can’t believe this is over.” I’d worked on it for three or four months solidly. I really put everything I had into it, and it was a really difficult time for me in my personal life as well. A year later, I can appreciate it. Seeing the girls reposting old images, it does bring back lots of fond memories.

One of our colleagues, Ben Farrey — the video engineer I worked really closely with on that production — passed away a few weeks ago, and he was an amazing part of the crew. He kept us going. And he had a huge responsibility. A lot of people think that if you do the visuals, you’re somehow responsible for them coming out on the screens on time and in the right place, but there’s actually someone else in between you and the computer to make sure it doesn’t fall apart. That person is the reason you can sit back and enjoy the show, and he was that for me.

Previous articleBefore You Watch ‘Hamilton’ on Disney+, First Catch Up on 10 Chart & Award Records the Show Has Set
Next articleSia Is Not Just a Mom: ‘I’m a F–king Grandma!’

Marina has returned with “Purge the Poison,” a guitar-driven track about the work that must be done to heal the planet and ourselves, today...
Read more
Uncategorized

Brockhampton Recruits Lil Nas X For a Woodland Trip in ‘Count on Me’ Video: Watch

Fans have been asking for a Brockhampton and Lil Nas X collaboration for the last few years. Now, their wish has come true. On Wednesday...
Read more
Uncategorized

Lance Bass Isn’t Technically on ‘The Circle,’ But This Is the *NSYNC Member He’d Catfish As

What’s it like to walk a mile in Lance Bass’ shoes? His longtime assistant Lisa Delcampo finds out in season 2 of Netflix’s The Circle, in...
Read more
Uncategorized

Brockhampton Recruits Lil Nas X For a Woodland Trip in ‘Count on Me’ Video: Watch

Fans have been asking for a Brockhampton and Lil Nas X collaboration for the last few years. Now, their wish has come true. On Wednesday...
Read more

Marina has returned with “Purge the Poison,” a guitar-driven track about the work that must be done to heal the planet and ourselves, today...
Read more

If you purchase an independently reviewed product or service through a link on our website, we may receive an...
Read more

Lance Bass Isn’t Technically on ‘The Circle,’ But This Is the *NSYNC Member He’d Catfish As

What’s it like to walk a mile in Lance Bass’ shoes? His longtime assistant Lisa Delcampo finds out in season 2 of Netflix’s The Circle, in...
Read more

A coffee break in the United States and elsewhere is a short rest period granted to employees in business and industry. An afternoon coffee break, or afternoon tea, often occurs as well.

10 Cool New Pop Songs To Get You Through The Week: Rina Sawayama, Yungblud, Austin Mahone & More

Looking for some Monday motivation to help power you through the start of another week? We’re right there with you, and with some stellar...
Read more
Uncategorized

How to Watch ‘A Bowie Celebration: Just For One Day!’